With his admission to the University of Mississippi in 1962, James Meredith became one of the heroic figures in the American Civil Rights Movement, succeeding against every legal, political and bureaucratic obstacle that blocked his path to becoming the university’s first African-American student. His persistence opened the door for thousands of African-Americans who followed and set an example for every student, of every background, about what even one individual can accomplish. The 1954 U.S. Supreme Court ruling on Brown v. Board of Education, which declared that separate schools are “inherently unequal,” made integration of schools possible. Some schools and universities accepted integration easily, while others put up great resistance. Examples of resistance follow:

Today, these historical events serve as markers of how far we’ve come as a nation, a state and a university, and they encourage us to work even harder to serve as a positive example of the benefits of diversity and inclusion. In October 2012, UM commemorated the 50th anniversary of its integration, an event that profoundly impacted this university’s vision and character. We see the next 50 years as a time to achieve more – to establish the highest levels of academic excellence, to prepare great leaders for every profession, to increase service projects across Mississippi and around the world, and to open the doors of higher education to all students willing to do the work required by a leading university, whatever their race, nationality, background or economic circumstance. We invite you to explore this website to learn more about James Meredith and the university as it was in 1962 and as it is today — a place that demonstrates an unwavering commitment to change and progress. 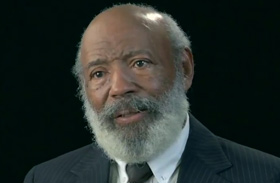 Watch a video about the legacy of James Meredith. Produced by Media and Documentary Projects. Watch more in the Video Gallery. 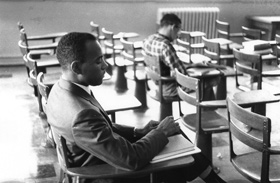 View a photo gallery of James Meredith as he attends his first classes at Ole Miss. Photos courtesy of Ed Meek.